I can’t help but laugh whenever I hear the phrase “Melon Hammock”.  It just sounds like it should be some horribly inappropriate euphemism.  Eventually, I’ll be reminded of a certain piece of men’s undergarments, and must metaphorically pressure-wash the inside of my brain.  I’m not talking about just putting the hose to it, but rather the kind of intense pressure-washing that is strong enough to separate flesh from bone, thus completely eradicating the image from my mind.  I tried to come up with a better term (melon sack, melon support, etc) yet each one leaves me giggling, because apparently I’m still 12.  At one point, while planning this project, in an effort to embrace my sophomoric tendencies, I even asked my wife if I could use some of her old bras.  For a moment, I thought the delightfully funny image of a bra used to hold actual literal melons was enough to convince my wife.  I was wrong.  I ended up just using the fabric from an old T-shirt instead.

already count about 15 melons that have started to swell up. They need to be hammocked (verbing nouns wierds language :)) soon, or they will snap the vines.

So, here’s the issue.  I decided to grow the melons on trellises because of limited space.  Even these smaller “Sugar Baby” varieties will quickly take over the whole garden if I just let them crawl along the ground.  So, this is where the pyramid trellises come in.  The vines grow up instead of out, and the space is saved for other things.  However, as strong and prolific as the watermelons are, they aren’t strong enough to hold the weight of a developing melon.  Eventually the melon will get too heavy and snap the vine.  To solve this issue, each developing melon needs a “hammock” that’s actually anchored to the trellis itself, thus taking the weight off of the vine, and allowing the melon to develop normally. 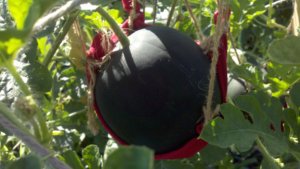 Using the material from the old T-shirt, I made little slings, and tied the corners to the structure itself.  This was much harder than it sounds.  Some of my trellises are an Escher-like hellscape of tangled vines, wood, and twine.  For each hammock, I had to create a path through this mess that wouldn’t put any weight on the criss-crossing vines, yet still firmly supported the melons hanging below.  When all was said and done, I had thirteen melons supported by these hammocks.  Two more melons were growing on the ground, beneath the trellis.  So I’m hoping for fifteen small Sugar Babies at the end of the season, but we’ll see. 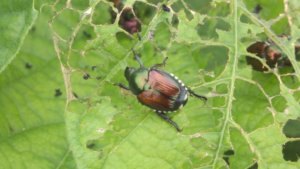 Japanese Beetle snacking on my beans... here we go again!

It just so happened that I noticed some interesting leaf damage to my beans when I was out there.  Several plants leaves were eaten in a way that left the interlocking veins of the leaf, leaving a lacy skeleton behind.  As I searched through the plants, I found the culprit: a swarm of Japanese Beetles.  So, just as we finish fighting off the relentless Colorado Potato Beetles, we get hit with a wave of the Asian cousins… awesome.

This entry was posted on Monday, August 8th, 2011 at 2:13 pm and tagged with Community Garden, first time gardener, gardening, melon hammock, Nerd, Rochester, trellis, watermelon, watermelon trellis and posted in Gardening, pest control, trellis, Watermelon. You can follow any responses to this entry through the RSS 2.0 feed.
« The Great Potato Harvest
I’m Sorry… »